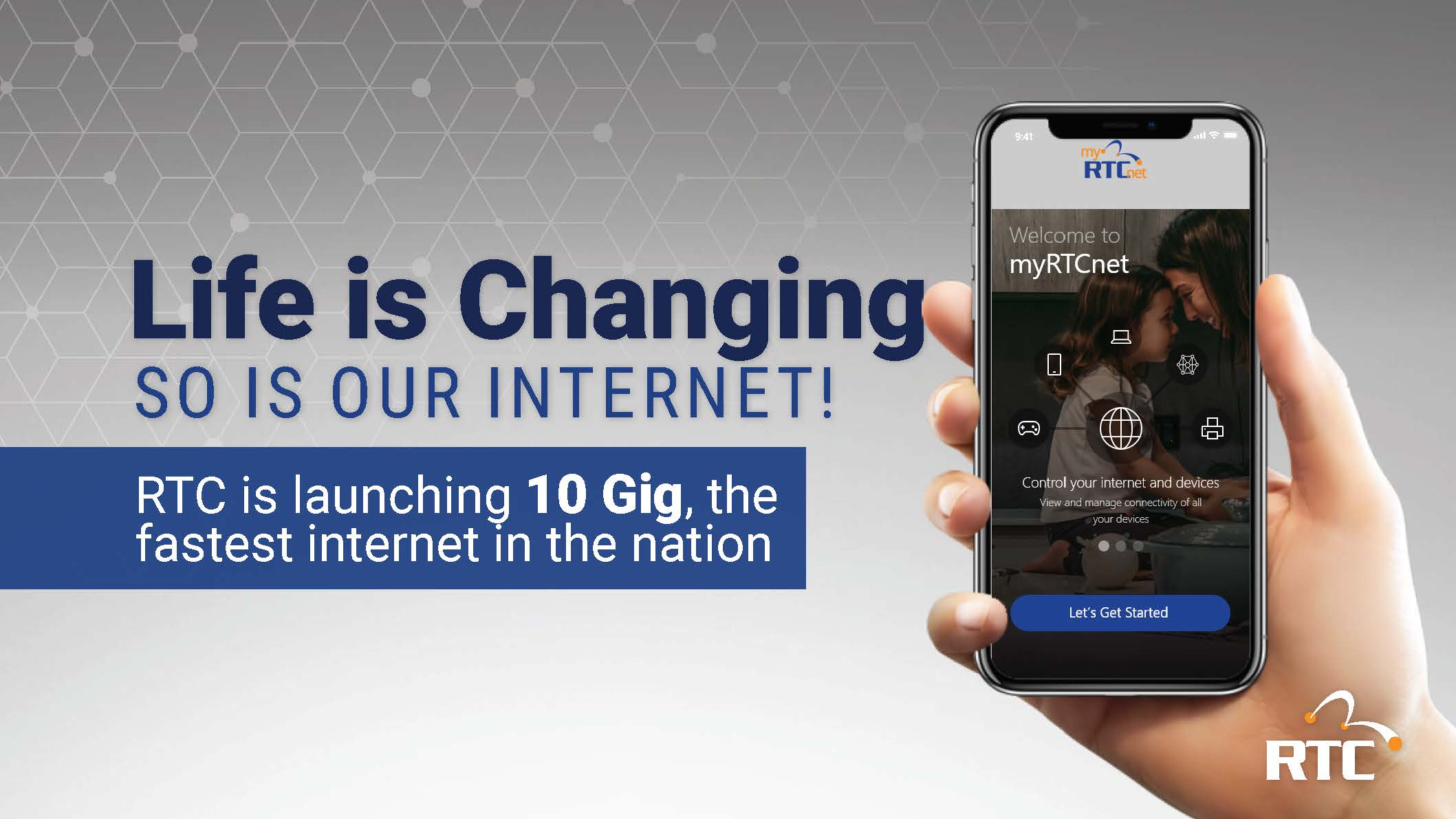 Life is Changing. So is our internet!

RTC is launching 10 Gig, the fastest internet in the nation!

Life has changed a lot over the past year. With so many of us working and learning from home, we’ve become more reliant on our internet than ever before. We’ve trusted our home networks to connect us to everything from homework to healthcare.

While things are slowly returning to normal, our relationship with the internet has changed for good. We’ve learned that remote work, telemedicine, and video conferencing are conveniences that can keep us connected to the world, even on the other side of a pandemic.

At RTC, we’ve changed, too. With upgrades to our robust fiber network, we are now able to offer speeds of 10 Gig—the fastest you’ll find anywhere in the country.

And 10 Gig isn’t the only change you’ll see at RTC. With this network upgrade and new blazing fast speed, we have dropped the prices for our two other fastest speeds. Now, residential customers can enjoy 1 Gig for just $125 a month, which includes our Total Experience Wi-Fi package (a $17 value) at no extra cost to you.

The myRTCnet app, which is free with your Gig internet service, has also been updated to provide you a better user experience. Our improved app will feature a more attractive and intuitive  design, a new security dashboard, and the power to prioritize devices.

“We don’t want our customers to be held back by their internet,” said Brooks Goodall, RTC Chief Operations Officer/Asst. General Manager. “That’s why we’ve created the fastest, most reliable broadband network. We’ve made a promise to provide the cutting-edge technology you need to stay connected to the world, and 10 Gig is the latest way we’re fulfilling that promise.”

Just a few years ago, 10 Gig speeds would have been unimaginable. In 2008, only 16 percent of Americans had access to internet service of 10 Mbps. Five years ago, RTC was among the first five  percent of providers to offer 1 Gig, an internet connection that transmits data at a speed of 1000 megabits per second. The widespread deployment of fiber has allowed for speeds to increase  rapidly, and today, 1 Gig speeds are available to over 80 percent of Americans.

Now, we are staying ahead of the curve by joining the first one percent of providers to offer 10 Gig–which is 10 times faster than some of the fastest internet speeds available in not only North Dakota, but the nation.

Only a handful of Americans have access to 10 Gig internet from their home, and you could be next. For now, 1 Gig is more than fast enough for the average household to work, play, and stream simultaneously without interruption.

Gig internet nearly eliminates network latency, a common term for the total time it takes for a short message to make it from sender to receiver. This allows for faster access to web pages, clearer video, better call quality, and improved online gaming, where a few seconds of lag can mean the difference between life and (virtual) death.

But as life continues to change, 10 Gig internet will enable technologies that we haven’t even dreamed of yet. Look around your home: how many devices are currently connected to the internet? You’ll probably see phones, gaming consoles, smart TVs, bluetooth-enabled speakers, and voice-activated assistants like Alexa.

These devices are just the beginning. Projections show that 63 million American homes will qualify as “smart” by 2022, with everything from internet-connected light bulbs to refrigerators. Speeds like 10 Gig will ensure that all of these devices work to their fullest potential, allowing you to game without lag, seamlessly stream your favorite shows in every room, and video chat with crystal-clear high-definition displays.

From video chatting to virtual reality, we can only imagine what the future of smart home technology will hold. And with Gig speeds and RTC’s unlimited data, the possibilities are endless.

“We’ve always been ahead of the curve,” Goodall said. “Now, with 10 Gig, we are building the network of the future.”

Call 701.862.3115 or visit rtc.coop/internet to sign up for Gig speeds today and start enjoying the nation’s fastest internet!